High-tech instead of side effects

The blockage is as thick as a finger and is now extending from the knee up to the thigh. It consists of coagulated blood and is stuck in the artery. The head of the catheter, on the other hand, is just a bit larger than the tip of a match. The head of the catheter is inserted into the artery by the surgeon through a small puncture and guided to the vascular occlusion under X-ray monitoring, where it then begins to rotate and suction at the push of a button. The thrombus is completely removed seconds later, leaving the vascular walls unharmed. The instrument used for the near miraculous removal of the threatening obstruction was a Rotarex®S catheter from Straub. It is powered by a FAULHABER motor.

Products in this case

We observe the atherectomy and/or thrombectomy described here (practitioners use different terminology for its removal, depending on the character of the clot) through a transparent plastic tube, which represents the artery. This is a very realistic demonstration and simulation of the treatment for peripheral arterial disease (PAD). According to projections, in Germany alone about two million mostly older people are affected by a PAD. This is caused by the narrowing of a femoral artery, which is followed by slowing of the blood flow and the subsequent formation of a blood clot. 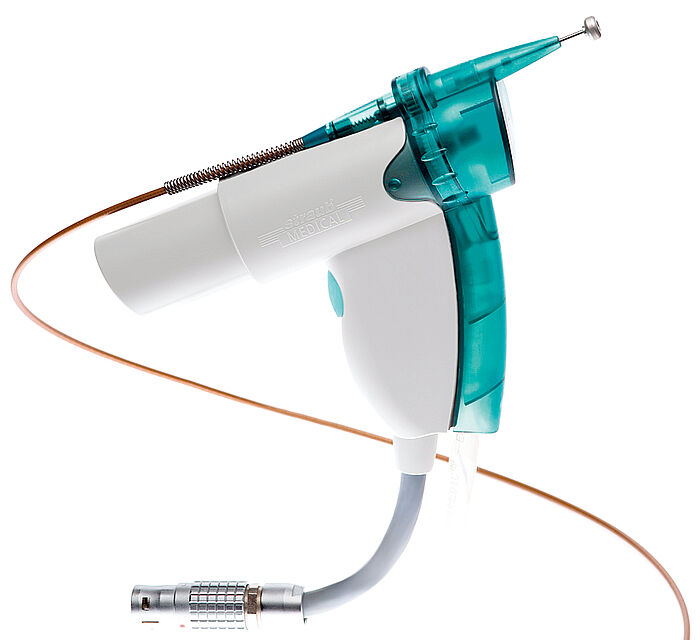 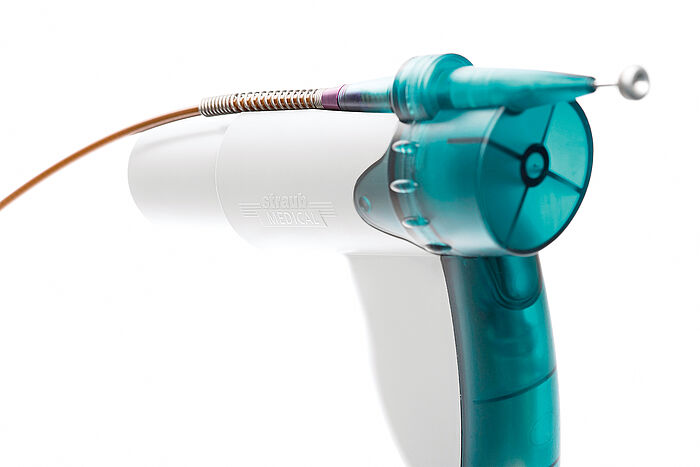 The blockage often starts with vessel scarring or calcification. At a narrowed point called a stenosis, the flow of blood is significantly reduced. At some point, due to the constant movement in the knee, for example, and the pressure of the calcification, the inner layer of the artery ruptures, which starts the clotting process at exactly this location. The resulting thrombus (the blood clot) completely blocks the artery. Due to the bottleneck, this thrombus continues to form upwards until it blocks the entire vessel, which frequently stretches over 25-30 centimetres. Other small vessels then attempt to supply the leg with blood, but their attempt is futile as the volume of blood does not suffice. The muscles get less oxygen, which in essence is the equivalent of an engine running without petrol. Walking becomes painful after just a few steps. The patient is forced to rest repeatedly. This is where the colloquial name of PAD comes from: “shop-window disease”. To hide the ailment from others, patients prefer to take a break in front of shop windows.

There are various methods for eliminating thrombi and the underlying narrowing. Thrombolysis is used frequently. In this process, substances that dissolve the thrombus are passed through a catheter directly to the thrombus. Such thrombolytics are not without a large number of side effects, however, one of which being haemorrhage. Moreover, patients must be monitored in intensive care for up to two days. In addition to that, thrombolysis is only effective for new occurrences of thrombus and has no impact on other occlusive materials such as calcifications or scar tissue. The initial narrowing also remains when this method is used. If the thrombus is already older than two weeks, thrombolysis is no longer effective.

Purely surgical removal using a catheter (Fogarty method) takes place by means of a balloon. Once the vascular surgeon has surgically exposed the artery, usually the inguinal artery, this balloon is completely emptied and guided inside the vessel through the clot. On the other side of the blockage, the balloon is pumped up to the diameter of the vessel by injecting a saline solution. The filled balloon is then pulled back out by the surgeon, the idea being, that the blood clot is removed from the vessel at the same time. However, this process often has to be repeated multiple times. And even then it is not certain that the entire clot has been dislodged. Any thrombus residue can become the nucleus of a new blood clot. Furthermore, this method of using an inflated balloon over the entire length of the vessel also results in massive damage to the vascular wall, which often results in abrupt reclosure of the vessel. 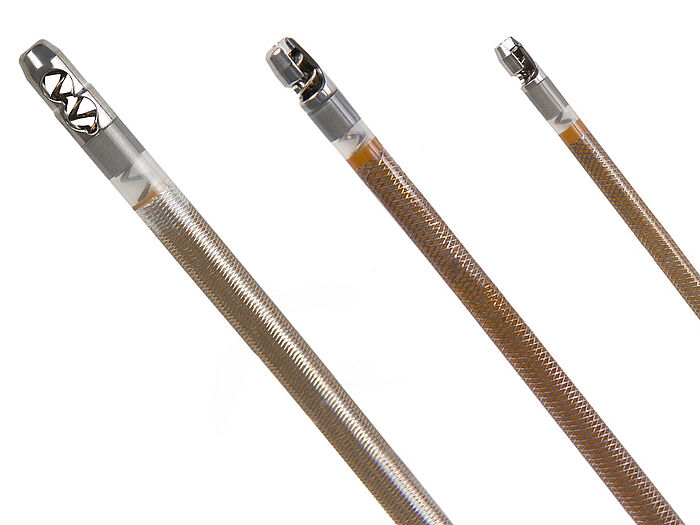 The rotating head dislodges the solidified occlusive material and shatters it, so that the resulting fragments can be transported out through the catheter by the helix into a collection bag outside the body. © Straub Medical 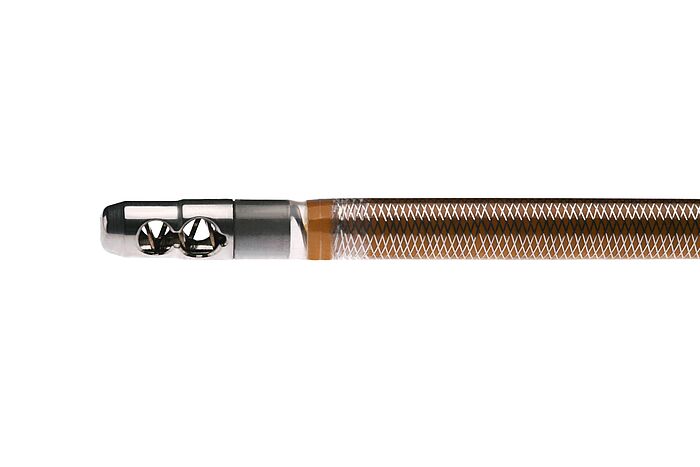 Straub Medical's method, on the other hand, is elegant and efficient: A motor outside the human body is connected to the catheter via a contactless magnetic coupling. The rotation generated by the motor is transferred inside the body to the head by means of a high-strength steel spiral (also called helix) inside the catheter tube. Similar to a chisel, the catheter head is bevelled at the front on two sides. As soon as the head begins to rotate, these surface areas dislodge the solidified material from the inside and cause the fragments to move in a strong vortex, which then clears the entire cross section of the blood vessel. The catheter head also has two small side openings where the helix is exposed. Pursuant to the Archimedean principle of the screw, the rotation of the helix results in suction. This suction removes the fragments of the blocking material into a hose. The fragments are further crushed by interior blades when they enter the openings, so that the removed debris can pass smoothly through the passage to the collection bag outside the body.

"The occlusive material is not only thoroughly shattered, but also completely removed," explains Dirk Dreyer, Director of Sales and Marketing at Straub Medical. "The side effects known from thrombolysis and other procedures are thus avoided. In most cases, the occlusive material can be removed with a high degree of reliability in one to two passes. On average, the problem is solved in three minutes." Thrombolysis with its many side effects is also no longer required for dissolving and removing fresh thrombi that have not yet solidified into massive clots. For these, there is the Aspirex®S variant, whose suction head manages without the rotating chisel of the Rotarex®S. The suction effect of the rotating spiral suffices to extract the blood clot into the windows of the head and then transport it out of the body, similar to the Rotarex®S. Straub catheters can also be used for blockages in veins, bypasses, stents or dialysis ports.

From Formula 1 to the operating room

The evolutionary history of the Rotarex®S method is typical for the medium-sized medical technology industry in Switzerland: a high-tech engineer hears about an unsolved medical problem (often by chance) and comes up with a solution. The founder of the company, Immanuel Straub, who died in 2012, had been developing novel high-performance springs since the 1950s, which were installed in the valves of Formula 1 engines, among other things. At the end of the 1980s, a friend and doctor drew his attention to the difficulty of removing vascular occlusions. The engineer then came up with the idea of combining the catheter, which was already widely used in vascular medicine, with a high-performance spring, which is basically what the internal wire spiral is, and the rotating chisel designed by him. As a result, Straub developed a completely new treatment method that has stood the test of time in clinical use since 2000. For the Rotarex®S head to dissolve the clot and to have sufficient suction, this requires relatively high and consistent speed. As a guide value, 40,000 and even 60,000 rpm are used, depending on the catheter size and model. This range must be adhered to as closely as possible for technical reasons. The force transmission from the motor housing to the catheter takes place via a magnetic coupling. It is critical to keep the speed within a very narrow range during use, no matter whether the hardened blockage is broken up or whether the last few particles are transported away. 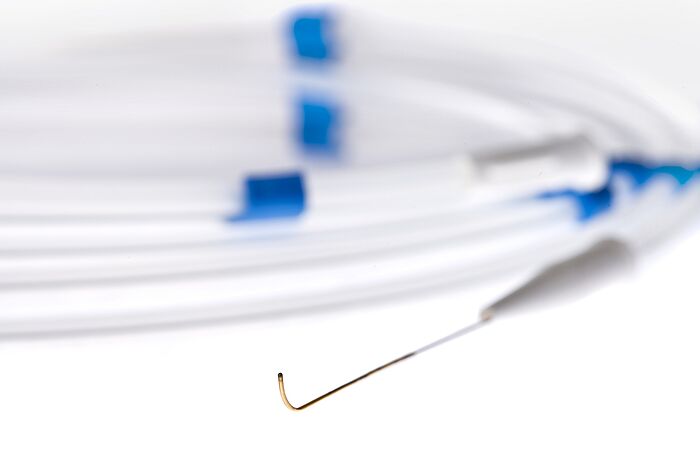 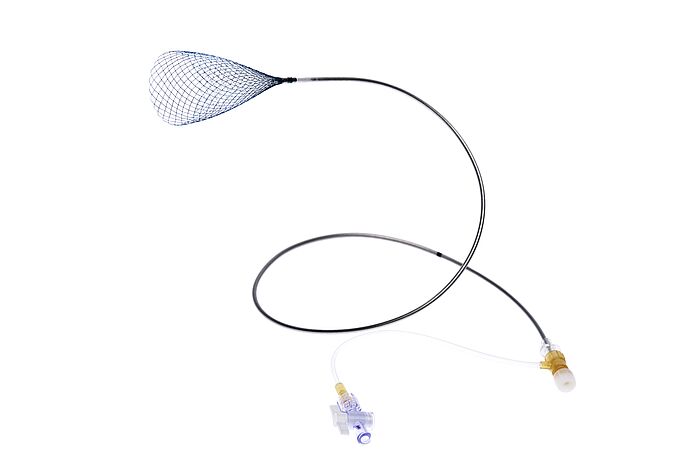 The control thus reacts very quickly to any load change and the motor must be able to convert its signals with corresponding precision. "There aren’t many motors that meet our quality standards," explains Dirk Dreyer. "FAULHABER provided support already during the development phase of the first prototypes and provided important know-how. One of the issues we had to deal with for using a motor in a medical device was medical products approval. FAULHABER has the necessary certifications, which gives us an additional advantage in terms of proof and traceability of the parts of the device."
The motor is fitted in the handpiece of the device and must thus be as small and light as possible. It also had to be as quiet and vibration-free as possible during use. The brushless drive of the 2444 ... B series is therefore already balanced during manufacture. Material is removed milligram by milligram from the rotating magnet until the concentricity is optimised at a high rate of speed. The motors for Straub Medical then undergo additional precision balancing, in the course of which the bell of the magnetic coupling is also processed. The latter serves to contactlessly transmit the force between the drive and helix without a fixed mechanical connection. The minimal gap between the coupling elements makes it possible to separate the sterile system components inserted inside the body from those that work nonsterile outside the body. For this purpose, the handpiece and the motor are wrapped with a sterile foil that is running through this gap, and the sterile catheter is then coupled to the handpiece via the foil. But the magnetic coupling also provides torque protection: When the helix or Rotarex head is blocked during operation, the coupling element on the motor continues to rotate without adding additional force. This prevents damage from occurring on the motor or device, and even more importantly the blood vessel is protected against wall damage and destruction.
Rotarex®S and Aspirex®S catheters are available with diameters between 2 and 3.3 millimetres. Blood vessels must have a diameter of at least 3 millimetres in order to be accessible by the devices from Straub Medical. Such diameters include, for example, the vessels of the legs, which are particularly frequently affected by occlusive diseases, and also those of the abdomen. However, veins in the brain and coronary vessels are too narrow or too curvy for the catheters that are currently available. This method is as of yet not suitable for stroke and heart attack victims. "Our developers are working on even smaller catheters, so that these patients can also benefit from our method," reports Dirk Dreyer. "This is a unique medical/ technological challenge that we aim to overcome with the support of FAULHABER."