It was a challenging project from the start; field medics need to be fast on their feet. The Army wanted a pump that was battery operated, weighed less than a pound, and provided no electronic signature and minimal noise to inhibit detection. Meeting those requirements meant designing with an eye toward efficiency. The result was the Power Infuser, a 5 in. x 4 in. x 2.3 in. unit that weighs just 0.6 lbs. In addition to pumping as fast as 100 mL/min, the unit can also operate in bolus mode, administering 250 mL in a single burst, then stopping until commanded otherwise.

Products in this case

Most people may not realize that the human body can be as much as 85% water. Small wonder, then, that one of the first lines of treatment for trauma patients like wounded soldiers is controlled fluid replacement, often at high volumes. The problem is that conventional infusion pumps are typically designed to deliver small amounts of fluids at high accuracies 100 mL over the course of an hour or more, for example, which is far from sufficient for trauma treatment. When the U.S. Army went looking for a compact, portable field unit that could run at rates of 100 mL/min, Infusion Dynamics (now Zoll Medical Corp.) turned to motion control and efficient, high torque DC-motors from FAULHABER to provide the answer.

The design consists of a modular pump with a disposable cartridge that sits on top. The unit operates on six AAA batteries for a total of 9 V. The Army’s goal was for a change of batteries to infuse one patient; the finished device is so efficient it can operate for eight to ten hours at full speed, infusing multiple patients on a single battery pack. 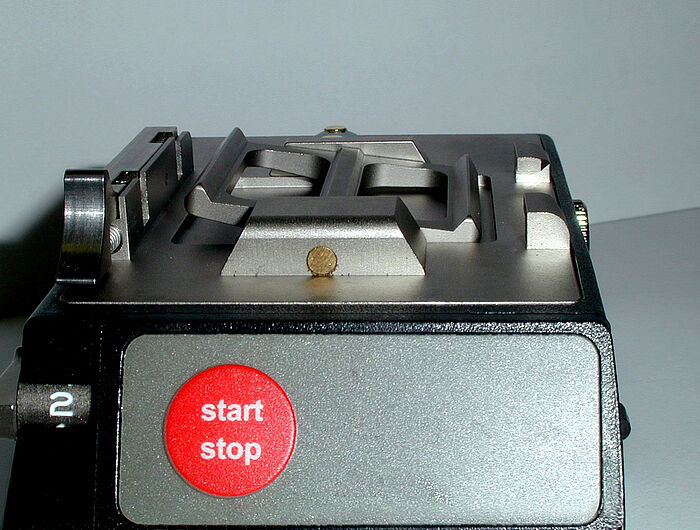 A yoke rocked by a rotating eccentric cam compresses first one tube, than the other to pump fluids. (Courtesy of Zoll Medical) 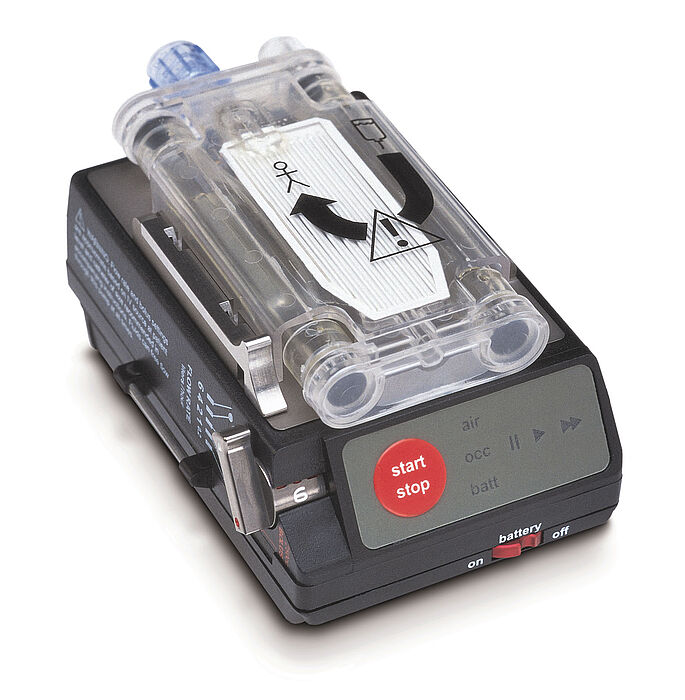 The Power Infuser consists of a base pump unit topped by a disposable cartridge. (Courtesy of Zoll Medical)

The mechanical part of the pump unit consists of an anodized aluminum frame topped by a yoke with two flanges on the underside in a fork configuration. The disposable cartridge, which sits atop the yoke, essentially consists of two parallel, transparent plastic tubes, each with passive check valves on opposite ends causing unidirectional flow as the tubes are compressed. The fork on the underside of the yoke straddles a rotating eccentric cam that forces it to rock back and forth. As it does, a ridge on top of each side compresses the tube of the cartridge above it. The action expels the fluid from the cartridge tube into the patient’s IV line.

To maximize battery life, the design team focused on efficiency first. Each time one of the tubes is compressed, it stores potential energy. Once the liquid is expelled, the potential energy converts to kinetic energy as the expansion of the empty tube boosts the action of rocking the yoke to the other side so that it can begin to compress the other tube. “It’s incredibly efficient,” says Michael Loughnane, now president of Instech Labs and one of the designers of the unit. “If you were to just use one tube, you’d get a certain flow at a certain power. If you add the second tube, the power requirements only go up slightly but the flow doubles. We use this balanced pumping action to get the best efficiency out of the mechanism.”

The pump was designed so that the motion never completely closes off a tube. Such occlusion, as is found in peristaltic pumps, consumes energy, both for compression and for controlling backflow. Built into the body of the cartridge is a separate air elimination filter consisting of one hydrophilic membrane and one hydrophobic membrane. Air is forced out through the hydrophobic membrane. This portion of the cartridge ensures no air bubbles will enter the IV line. “You could actually drop the bag on the ground and it pumps all the air out and then finish off pumping the fluid in the bag,” says co-designer Kenneth Cook.

To power the yoke, the group needed a DC gear motor that could provide enough torque to compress the tubes, but in a package small enough for the pump’s size constraints. Above all, it had to be efficient. “Using a mathematical model, we homed in on the best gear ratio, the best speed and then picked the appropriate gearmotor and gear ratios to meet those criteria,” says Loughnane. They chose a 13-mm-diameter, 31-mm-long servo motor from FAULHABER, fitted with a 15-mm-diameter gearhead for a 76:1 reduction ratio. “We went to some other companies,” he adds. “We found that of the motors we tested, FAULHABER’s were the most efficient.”

They built their initial prototypes with 9 V motors but discovered they got more efficient performance by under driving a 12 V model. “The current drain on the motor is usually better if you’re not working at the high end,” Loughnane says. “It’s a more efficient design than getting one that's made to work at 9 V and running it at the full 9 V.” The group made one modification to the gearmotor, adding an external bearing to the distal end of the shaft to provide additional support. 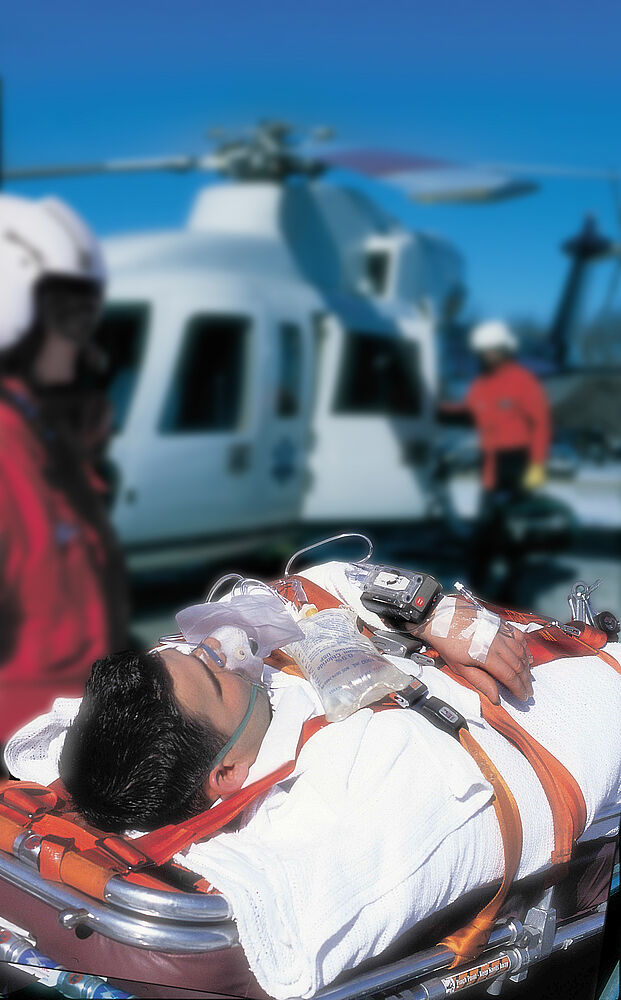 With the mechanical design finished, the next problem was control. The device could not have an electronic signature, which ruled out the use of a conventional microprocessor. Instead, the group opted for discrete logic and analog control based on back-EMF feedback. The selector switch that sets the pump rate establishes a voltage that the amplified back-EMF of the motor must match. The analog circuit varies the drive signal to the motor depending on the results, providing closed-loop speed control.

“We depend upon the back EMF constant to determine how fast the motor is going,” says Loughnane. “One of the things that we like about the FAULHABER motors is that the back EMF constants have been well within the 10% that they claim; they’re actually much better than that. If it varied from motor to motor that would be a problem, but that number has been very good and consistent.”

In a move to further improve efficiency, the speed controller only drives the motor in a forward direction. It does not attempt to hold the speed of the motor steady throughout the cycle. Instead, if the motor is going a bit faster after peak compression as a result of stored potential energy, the circuitry allows it to free wheel, electrically speaking.

A side benefit of the control approach is that the current required to drive the motor is directly related to the degree of occlusion in the tubes. If the current rises beyond a certain threshold because the pump is plugged, the unit will automatically shut off. Similarly, if the IV tube is hooked up to an undersized needle that exerts backflow pressure, the unit will stop. According to Loughnane, 18-gauge needles are the optimum for trauma patients; the automatic stop can prevent an error.

The design also includes a pair of stainless steel pins that form a conductivity meter in the fluid path. In the event that air fills the tube due to an elimination filter failure, resistance goes up and the pump stops. The medic must intervene to clear any air and restart the pump. The meter can also detect whether the right fluid is being used - a saline solution or other solution with a physiological salt concentration.